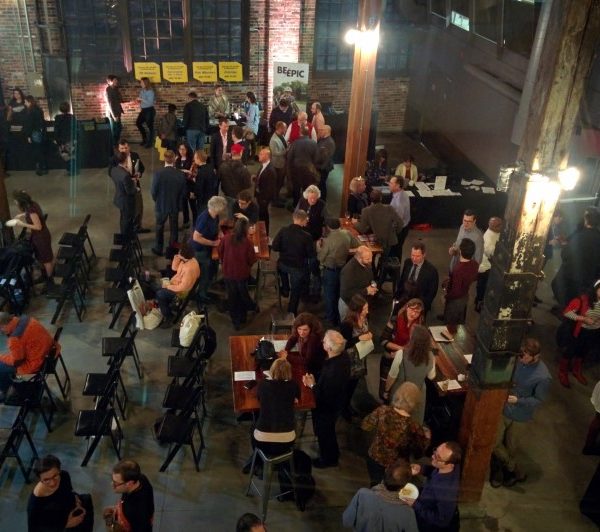 Rain, slush, and snow didn’t stop a group of dedicated cyclists and their supporters from attending the 2016 Toronto Bike Awards at Steam Whistle Brewing on February 24th.

Jacquelyn Hayward Gulati, Manager of Cycling Infrastructure & Programs at the City of Toronto – A revised ten year cycle plan will be presented to council this year, but 2016 is already starting off with the right sort of momentum; there are plans to install a bike lane on Bloor St in the Annex, and a two-way bike lane on Lakeshore in Etobicoke.  Having been a cyclist in suburban Mississauga and downtown Toronto, she was happy to announce that the cycle plan includes much more support and consideration for infrastructure and programs to assist suburban cyclists. Toronto-based bike tourism award – Bike Rally fundraises in support of PWA (People with Aids) Friends for Life; Every July for the past 17 years more than 300 Riders and Crew have been departing from Toronto on a 6-day, 600 km journey to Montréal for PWA’s Friends For Life Bike Rally. This annual fundraising event has raised more than $14 million dollars and is the sustaining fundraiser for the Toronto People With AIDS Foundation (PWA). The funds raised through the Bike Rally enable PWA to provide critical services and support to individuals living with HIV/AIDS in Toronto Congrats to everyone involved in making the Toronto Bike Awards a success!