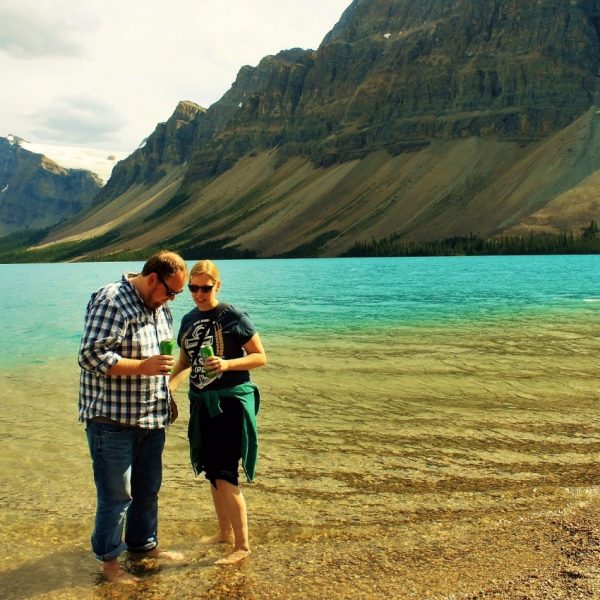 This August I had the pleasure of attending Canada Malting’s 2016 Course along with 40+ other brewing professionals from across North America.

This is a guest post by our Brewing Team Lead, Erica McOustra.

The week long course provided a fascinating look into barley growth including varieties, quality, procurement, as well as malting theory, practice, and malt handling in the brewery. We also had a great time out in the fields talking to farmers, checking out barley elevator storage systems, seeing the lab where the various malting analyses are performed, as well as hiking, climbing mountains, drinking beers, and of course making new friends. Here follows an overview of some parts of the course I found most interesting.

First of all a few photos. This is a view of Bow Lake, just outside Banff. The climb made the view that much better, I can’t believe how lucky I am to live in this gorgeous country. It was a difficult year for North American barley growers and maltsters in 2015. After a mostly dry season in Alberta, the warm wet weather at harvest meant that a lot the crop was chitted, or partially germinated in the bin. Higher moisture in the barley can lead to storage problems, and producers had to scramble to get large quantities in and out of the maltery quickly. While maltsters can adapt their techniques to mitigate some of the detrimental effects of chitting on the final malt, dealing with the higher protein levels seen throughout the 2015 crop is a challenge passed on to the brewers.

There are a variety of environmental factors that farmers and maltsters have to consider in order to produce a good quality malt. Late 2015 and early 2016 saw 8 months of near drought-like conditions, followed by one of the wettest Julys on record. Early indications of lower protein levels and plump kernels in this year’s barley might be good news for brewers, but weather conditions over the next 2 months will have a dramatic effect on the crop. Only the best barley will be selected by the maltsters, the rest being considered only good enough for animal feed, a proposition that means the farmer will at best break even but might take a loss. Some farmers have already lost their chance of being selected this year, as hail is a serious and damaging force that has been seen in many parts of Alberta for the past 5 years. One farmer we visited lost his entire 80 ha barley crop to hail. Most has been bailed for feed, and all that remains is a strip for the insurance adjusters to inspect.

Entirely different conditions exist in Saskatchewan & Manitoba, where Steam Whistle’s 2-row barley is grown and sent to Canada Malting’s Thunder Bay facility for malting. Lower elevation and flatter terrain affect the farmer’s choice in which barley varieties to grow. However carefully all factors are considered, Mother Nature can throw a curve ball at any moment over the growing season. As hopeful as producers are about higher yields and better quality this year than last, participants in this course were reminded many times that it isn’t a crop until it’s in the bin.

Just how every brewhouse produces different beer given the same raw ingredients, every malthouse produces different malt. Paul Ritchie, Plant Manager at CMC’s Calgary plant, gave us an in depth look at the process and introduced us to the folks behind the scenes who take care of everything from the intake of the raw barley, to the final lab checks on the malt before it’s ready to ship. Maltsters have to take on all of the challenges of the growing season and produce malt that fits within the (demanding) brewer’s specifications – a difficult task. Paul took us right in to see the steeping vessels, germination rooms, and even into the kiln, pulling samples along the way for us to examine and taste. Advance testing of the barley before it is even harvested, and then at every step of the malting process is key in order to ensure homogeneity. For example, one lot of barley may take up water during steeping differently than another due to variety, protein content, or the conditions it was harvested and stored under. The moisture content in that barley after steeping will then affect germination, kilning, etc. and therefore overall quality. The lab checks for consistent results, and runs small scale malting operations to examine new varieties and techniques. Their testing produces the specification sheets that come with every load of malt delivered to the brewery, and they can work closely with breweries to check that the malt performs as expected.

Malt handling in the brewery

Visiting breweries never gets old – everybody’s system is a little bit different. Also, systems are rarely ideal. This is certainly true of malt handling systems which are not always given as important standing as other, more visible, brewing equipment. Factors such as the speed the malt travels as it’s unloaded to the silo, silo design and maintenance, conveyor types, not to mention mill type and settings, all play a huge role in grist quality, and therefore brewhouse yield. Taking steps to evaluate malt and grist quality at every stage is important – to see changes and be able to react before problems occur in the brewhouse or beyond.

I could go on and on, but the truth is that while this week provided some great technical information on one of our raw ingredients, and one of the most important contributors to beer flavour, it also barely scratched the surface of all that there is to understand about malt. As a brewer I know that I take good quality malt for granted sometimes, and realizing just how many factors influence what goes into our mash tun certainly helped put things in perspective. I would certainly recommend this course to any Brewers using Canada Malting products, and I hope that my participation can help instigate more discussion about all things malt here at Steam Whistle in our quest to continually improve. Thanks to Cam and Greg for giving me this opportunity. Thanks also to Matt Letki and the rest of the Canada Malting and Grain Corp team who were excellent hosts. Matt was prepared for everything and did a great job keeping us engaged – he even somehow arranged for us to see this grizzly from the bus!