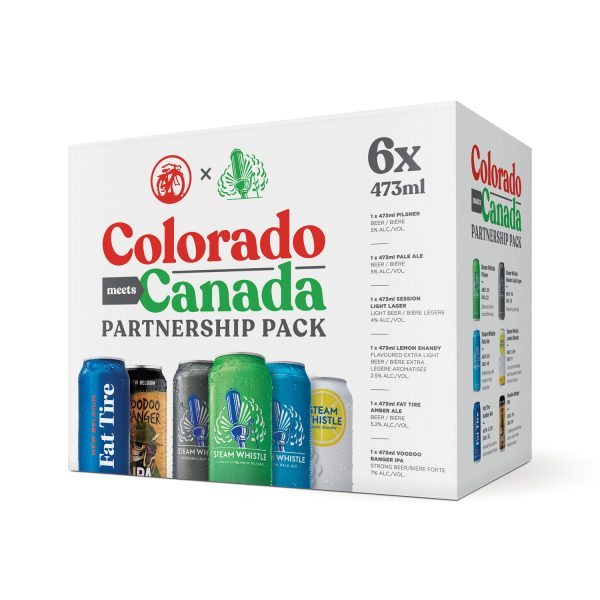 Great things happen when good friends come together! That’s why we’re stoked to announce the arrival of our Colorado Meets Canada variety pack. Combining our own beautiful brews with the amazing suds from our buds State-side at New Belgium (which we now brew locally), you can get a taste of the top sellers from both brewing companies, all in one convenient package.

What’s in the Pack?

The Colorado Meets Canada 6-pack is a blend of Steam Whistle and New Belgium favourites. With some of the most popular beers in North America, this pack will give you plenty of variety without sacrificing taste.

There’s absolutely no filler beers in this pack. Take a peak at the top tier brews below and see for yourself.

This New Belgium Brewing amber ale is one of the most successful craft beers ever thanks to its malt sweetness with a hint of bitterness.

Get your hands on the best selling IPA from the US, now made in-house by Steam Whistle. This IPA builds up to the perfect bitterness slowly but surely, with a light sweetness.

This blend of pilsner and lemonade is thirst quenching and deeply refreshing. Your favourite pilsner with a lemon twist to lighten it up just in time for summer.

Here’s the Steam Whistle staple–a crisp and light brew with more hops than the classic pilsner but a hint of caramel sweetness.

The Steam Whistle favourite you know and love is definitely in this pack. It’s the best selling craft beer in Canada thanks to its clean, simple ingredients and balanced taste.

This light-bodied beer is delicious and made for easy sipping, with lighter alcohol but plenty of taste.

Get to Know the Breweries

Steam Whistle is your all-Canadian brewing company that took the beer market by storm with clean, sustainable, and delicious beer. Known as Canada’s Premium Beer, Steam Whistle has stayed true to its roots since inception by The Three Fired Guys: we make great beer locally and remain fiercely independent.

New Belgium Brewing is a Colorado brewing company that brought the tastes and brewing style of Belgian beer to Colorado. From humble roots in the basement of the cofounders, New Belgium quickly became one of the most successful craft breweries in the U.S.

New Belgium and Steam Whistle have a lot in common. Not only do they both make great beer and lead in their markets, but both brewing companies share a lot of the same important philosophies.

New Belgium and Steam Whistle are also both laser focused on brewing clean but delicious beer. Our breweries use only water, malt, hops, and yeast to craft their beers, without any preservatives, additives, corn syrup, artificial flavours, or foam enhancers. Nothing but the exceptional sudsy goodness you’d expect from premium beers.

Try the Colorado Meets Canada 6 pack today for a taste of North America’s favourite beers. From lagers to pale ales, pilsners and shandies, there’s something for every taste and every mood.