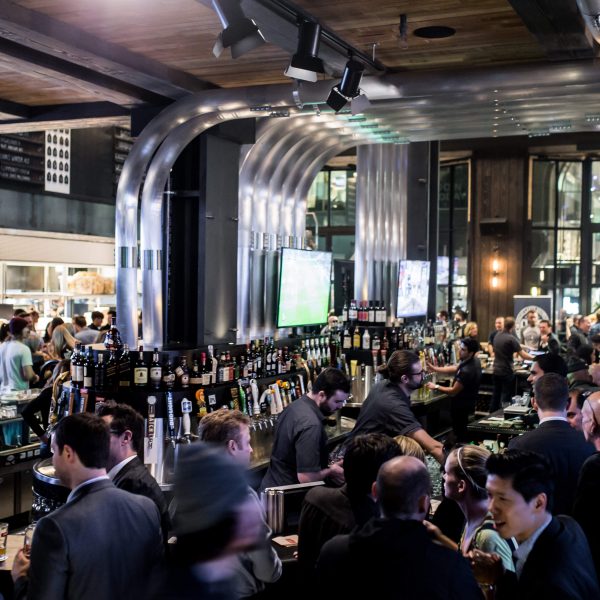 This month we are very excited to feature one of our newer licensees, CRAFT beer market in Toronto, Ontario!

Located in the hub of the financial district in downtown Toronto, CRAFT has become a popular spot for local craft beer and quality oriented / traditional pub eats with an urban twist.

CRAFT isn’t just a place where people go to have a beer and a bite. They are actively involved in their community and, like a good neighbor, try to make positive contributions wherever possible. Read our Q & A with CRAFT’s manager to learn more! How long has CRAFT Toronto been open for?

We opened beginning of December 2017. There are different locations across the country. Toronto is actually the 6th location. The original location opened in Calgary in 2011.

How would you describe CRAFT and the experience you provide?

CRAFT is an acronym which stands for C-community, R-responsible, A-approachability, F-family, T-true. We feel that these 5 terms describe the company’s core values along with how we establish ourselves as a business. Having such a large draft selection (143 to be exact, plus wine, cider and non-alcoholic beverages on tap). CRAFT is designed for everyone to enjoy. We like to think of ourselves as an approachable restaurant & bar. We’re fortunate enough to have this original approachability of getting people through the door and welcoming them into ‘our home’, so we are able to build on this. We are especially proud of our sustainability efforts at CRAFT. Some examples of our sustainability efforts at CRAFT include; our draft systems being all bull frog powered, almost everything we make is in house (even our bread), & the seafood we cook is all sustainable (Oceanwise). In terms of our community efforts, we work with an organization called meal share. It works by if guests order either baby back ribs or the harvest garden sandwich they’re making a generous contribution to a meal for someone in need. The community brewing program is another way for us to give back to those in need. It works by our staff members going to a local craft brewery and taking part in a pilot brew. They then will bring it back to CRAFT and market is as a community brew which will be used for a designated charity. Each brew is sold for around 3 months. For example, our most recent community brew involved our staff going to Blood Brothers brewery in Toronto to help brew a beer. Every customer that has purchased this brew at CRAFT donates $1 to the organization called ‘save our scruff’.

Nacho Barrel is a hit.

How long has Steam Whistle been sold in your bar/restaurant for?

What on your menu would you say pairs exceptionally well with Steam Whistle? What is your background? How did you get involved with CRAFT?

It’s a really cool story actually! I met Rob Swiderski (CRAFT’s co-founder) while I was working at a bar in Calgary. We got chatting about craft beer and it led to him offering me a job at the CRAFT in Calgary. I moved up in the company and eventually was brought from the Calgary location to Toronto to work here once it opened. The rest is history! CRAFT really loves to promote within the company and encourages staff to have a strong work ethic while genuinely loving coming into work every day. We strongly believe that happy and motivated staff members are the key aspect to a successful company. The letter ‘F’ in CRAFT stands for our sense of family. The best part of CRAFT is that we’re very well looked after. Also, when we say ‘family’ this is not exclusive to only our front line staff members. All of our farmers, breweries, charities we work with are considered as family!

What is your favorite object and/or part of CRAFT?

Definitely our rotating taps (which change every three months). Every Tuesday we have a different cask from local craft breweries. Emphasis on local partnerships has become especially important to us. We want to represent all different platforms of craft beer.

What type of crowd do you tend to have at CRAFT?

25%-50% working professionals. Every CRAFT location has a different vibe but Toronto definitely portrays approachability. We get all different kinds of crowds. This is due to our fair prices with great value. We don’t have a pretentious atmosphere, rather a quality oriented and welcoming atmosphere. Families, and people of all ages will feel very welcome. We are very excited about the opening of our courtyard patio for the summer. We think it’ll be a popular spot for weekends, before / after Blue Jay’s games!