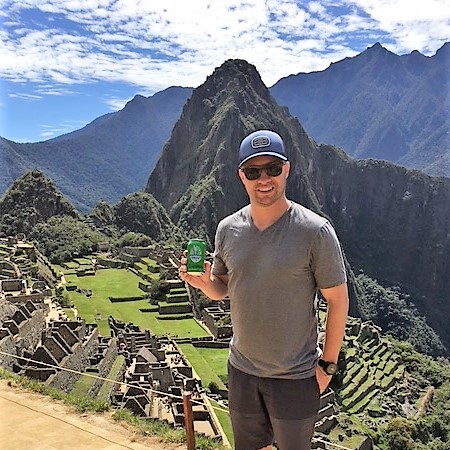 How long have you been a part of the Steam Whistle/GBF family?

I started January 2017 so I have been part of the GBF family for 2 years and 2 months.

What is your position at Steam Whistle?

I am the B.C. Sales Manager based in Kelowna, British Columbia.

Can you describe your role?

I am in charge of the sales team in British Columbia and I also have a sales territory in the Interior of B.C which I take care of.  I am responsible for making sure the B.C team hits our yearly targets. So I help with all things sales, marketing, promotions, training, key accounts and government relations for B.C.  No day is the same, but I am lucky to have such amazing teammates to help me with everything happening in the province.

Were you always interested in the brewing industry (or) why did you apply to Steam Whistle?

If you had to choose, what would be your favourite aspect of working at Steam Whistle?

I joined Steam Whistle because of the people and the culture they had, and I knew as soon as I walked into the Cathedral of Beer (The Roundhouse) for my interview, that it was meant to be.  I came from some larger beer companies so when I got to finally sit down with Greg Taylor and hear his passion and pride for the company, it really sold me, and I was beyond excited to join the team.  The singular focus behind our brand is second to none and I couldn’t imagine a better beer company to be a part of in Canada.

What makes Steam Whistle stand out as a brand?

The iconic bottle is what first made the brand stand out to me, but it is the Pure Pilsner inside the bottle that solidifies our iconic status as Canada’s Premium Pilsner.  We are truly Canadian, and I know all other breweries aspire to have what Steam Whistle has created.

What is a Steam Whistle initiative that means a lot to you?

All the green initiatives are really inspiring and coming from B.C, this is a major pillar that people care about!  I know there is more that we can do as a brewery but it’s great that we are leading the charge in Canada  – I definitely think we need to continue to champion green initiatives going forward.

Is it true when people say the Steam Whistle culture is contagious?

Absolutely! You feel it as soon as you walk through the doors at the Roundhouse and it honestly inspires you to “Bleed Green.”  I truly felt it after being at my first staff breakfast and know there is no other company where every department has such a close relationship and work so strongly as a team.

Where is your favourite place to enjoy a Steam Whistle?

Big White is my local ski hill that I’ve had a season pass at since I was 3-years-old, so nothing makes me prouder than having an ‘après ski’ pint or bottle with friends and family at multiple locations throughout the resort.  I also enjoy a cold and refreshing Steam Whistle on a hot summer day on one of the many patios throughout the Okanagan which is B.C’s lake country – a Steam Whistle after boating and surfing with friends is awesome!

What is one word you would use to describe your work experience with Steam Whistle and working in B.C?