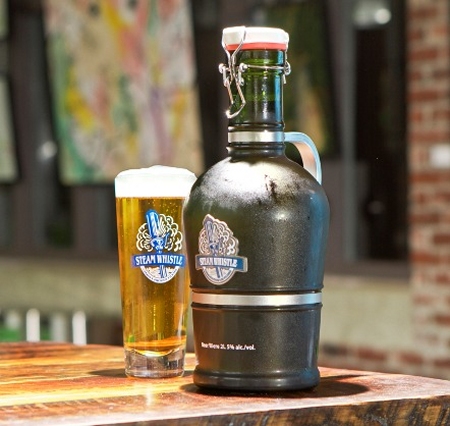 Steam Whistle started with a signature green glass bottle and we now have added green glass Growlers to our offerings from the Roundhouse.

What is the origin of a Growler?

Before bottled beer became economical and common after industrialization in the mid-1800’s, in the US if one wanted beer outside of the pub, it was usually draught beer filled and carried out in a growler, aka a “can” or “bucket” of beer. Many different containers (including pitchers, other pottery or glass jars and jugs, etc) were used to carry beer home or to work – the most common “growler” was a 2 quart galvanized or enameled pail as seen below. The term Growler is thought to have originated from the sound of escaping CO2 causing the lid to rattle or growl. The interest in craft beer is growing along with a demand for glass Growlers so we created a 2L Steam Whistle original that allows you to take fresh, draught-filled Pilsner home. The beer growler is also a great alternative to a bottle of wine at dinner parties or social gatherings.

How is the Steam Whistle Growler filled?

We’ve imported a Pegas Craftap bottle filling system (pronounced Peh-GOSS). The common way to fill growlers is top filled from draught taps which results in more foam and high dissolved oxygen levels, shortening shelf life of beer in growlers. Instead, the Pegas system uses the same operating principles found in bottle fillers around the world, with a counter-pressure of carbon dioxide, eliminating oxygen and excessive foam. Steam Whistle Growlers are fresh for 2-3 weeks after purchase, if kept refrigerated. Though once opened, it’s recommended that you consume within 24 hours for optimum freshness.

Did you know that Growlers are environmentally friendly?

Estimates show that North American use of glass growlers have kept more than 1 billion cans and bottles from going to landfills each year. By providing growlers to customers, bottle returns can be significantly reduced.

The Growler initially costs $39.95 filled with Steam Whistle Pilsner and can be refilled for $11.95. Available only at the brewery.