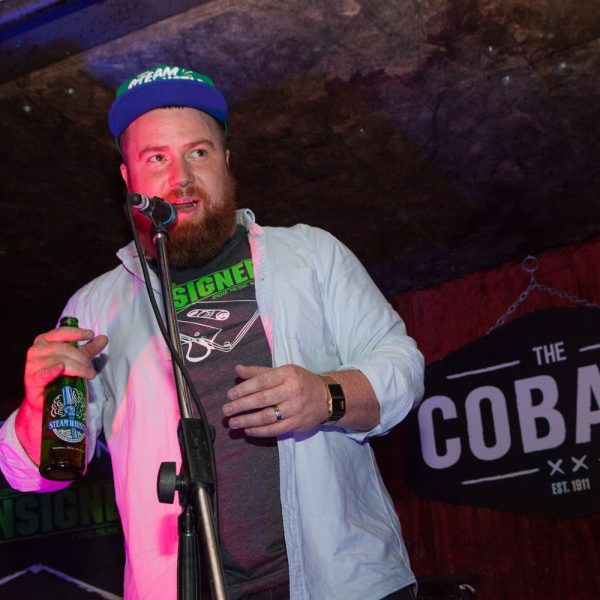 Why We Ride: Matt Weed

Matt’s been a Good Beer Folk for 14 years. We sat down with him to ask him a couple questions about his decision to ride in Princess Margaret’s Ride to Conquer Cancer.

Matt Weed is Steam Whistle’s Special Events Manager. He’s our Mr May, the creator of our brewery’s UNSIGNED Music Series, and Co- Founder of Fake Art Records . He’s a beer lover & world traveler with Glastonbury Contemporary Arts Festival, Coachella, Tokyo’s Suntory Brewery and Munich’s Oktoberfest among some of his memorable adventures.  Born and raised in Toronto, Matt is a graduate of Trent University’s Anthropology and History program, during which time, he spent a summer on an archaeological dig in Belize. His days are currently spent in Little Portugal, Toronto as a music lover, Husband, a Father and all around great guy.

What inspired you to get involved with the Ride?

The first year that I did the team ride in 2011 it seemed like an opportunity to do something fun and raise money for a great cause. At the time I didn’t have any ties to the Princess Margaret other than hearing second hand about the good work they do. Like most people, I’ve had family members affected by cancer but more than anything it seemed like an adventure to ride all the way to Niagara Falls, and if you’re doing-good at the same time, that’s a double whammy!

What’s your favorite part about the Ride?

Riding along the roads with such a big group. Crossing the finish line in Niagara and realizing what you’ve achieved is an exhilarating experience. Getting to that moment of arriving and realizing Hey, I did this!

What are you expecting/dreading/excited for?

Excited for: Getting back on the bike

Dreading: Can’t really say I’m dreading anything as long as it’s not freezing rain it should be a good time.

Expecting: There’s a huge hill once you get to Hamilton that’s a pretty heavy undertaking, but once you get to the top and you look down the Niagara Escarpment you get a moment of pride for the hurdle you’ve just accomplished. It’s a pretty amazing experience. I have a genetic advantage, due to my Welsh build I’ve got big calves which makes hills a bit easier.

How has cancer affected your life personally?

In October 2015 I was diagnosed with stage 2 testicular cancer which brought a lot into focus. It was the first time I had to face my own mortality. I was 35 years old with an 8 month old daughter at home. Suddenly I needed to figure out how I was going to be there to watch my daughter grow up. All of a sudden it was less about me and more about making sure I was there for my family. What has your experience with Princess Margaret been?

I’d been going to see a doctor since July, feeling like something was wrong. My family doctor kept telling me “It’s just an infection, there’s nothing to worry about”. I asked a couple of times if it was cancer and he assured me it wasn’t. By the time I went back a 3rd time in September he said “Huh.. Well maybe we should send you to a specialist.”

I was sent to an Urologist who took one look and said they were sending me in for a couple more tests, but I’m pretty sure it is cancer, which was fairly unsettling. I got the positive diagnosis in October when I was in Edmonton hosting our Steam Whistle Unsigned shows which was a very scary call to get.

I went in to see a specialist as soon as I got back. When I finally got my surgery date scheduled it was going to be a month and a half from my diagnosis date, which was alarming to me. The Doctor kind of shrugged and mentioned that the hospital is going through growing pains and was renovating so unfortunately that’s when they could deal with me. I came into work the next day and was chatting with my co-worker Dana who had also been closely touched by cancer and we talked about Princess Margaret and the amazing work that they do. I ended up calling the Genitourinary Unit asking what I needed to do to get in there. I got the referral from my family doctor and within 2 days, they got me in the clinic and they had me under the knife within 8 days.

The difference in care wasn’t just medical but on another level. My previous doctor I called 19 times to get the answer to 1 question, I couldn’t even get a hold of his receptionist! As soon as I got into Princess Margaret I had the doctors personal email, his assistant’s cellphone number should I need anything outside of hours, I had the nurses’ contact numbers who would always call you back within the hour.

When you’re facing these things you don’t want a doctor to tell you you’re going to be fine. You want answers. What am I facing? How do I deal with it? What do I need to prepare myself for? The way I work I want everything laid on the table in front of me so I can understand what I’m going in to. From the get-go that is the experience I had with Princess Margaret.

They called me within days and told me to stop eating they had room open up for a surgery. I walked up to the hospital where my family met me and went into surgery. I stayed overnight and was out the next day. I followed up with them 3 weeks later when the swelling had gone down, at that point they let me know that they had gotten the tumor but there is a chance that it had spread further. (With testicular cancer the landing point is in the lymph nodes behind the kidneys and I had some swelling which wasn’t necessarily tumor but could be the precursor to them).After consulting with the Oncologist they said you don’t need to do this chemo now but if you don’t there’s a 50 50 chance you’re going to need to in 5 years. Those just weren’t odds I felt like playing. With a young daughter at home, I didn’t want her first memories of me being sick so I elected to go right in to it and get it dealt with.

Dec 14th I started 3 rounds of BEP therapy, an aggressive yet effective form of chemo that involved me being in the hospital every day for 5 days to receive the first round. Over the next 2 weeks I’d go in once a week to get a smaller dose for 3 cycles. I was in for a total of 9 weeks. Over that time I became much more familiar with Princess Margaret Hospital, looking around at all the people they are treating I soon came to realize how lucky I was, not just to be under their care but the type of cancer I was dealing with. Testicular cancer is an example of how research has made a difference. 30 years ago your odds of surviving it were less than 70% where now it’s over 97%. That’s a real example of the work that Princess Margaret is doing and the difference they’re making.

I finished chemo at the end of Feb and was able to come back to work by the end of March.  It was tough, it took a lot more out of me then I thought it would, it doesn’t hit you all at once. It took a full month after chemo for me to feel well enough to return to work and I’ve been building up my health ever since. My last CT scan showed my lymph nodes have returned to their regular size and my blood tests are all clear. I’m going to be under surveillance with the Princess Margaret for the next 5 years but they don’t expect any further complications. At that point it was time to shift from getting better to training for the ride. I did lose all the hair on my head and facial hair and at this point it has all come back thicker than ever. Once my beard returned I felt all my powers had come back with it! What advice would you give anyone who is going through what you went through?

One huge lesson I had from this experience is while we have an amazing health care system in Canada, you need to advocate for yourself, you can’t just let yourself be pushed along the system. The doctors all have so much on their plates and you’re not always going to be their first priority. You need to make sure you are your own first priority and that you’re fighting for the care you need. Unfortunately it is the ‘squeaky wheel gets the grease’ situation. In this case, I soon realized I had to be and in this case it shaved over a month off of waiting for treatment. I can’t help but think that if I’d been advocating vocally from the get go I might have avoided chemo all together. The nature of testicular cancer is 80% of cases go misdiagnosed and missed due to the personal nature of the illness. You need to be aware of your body and what’s going on and you need to trust your body. If things hurt, if they don’t feel right you need to follow up with it. Don’t wait a week, don’t wait a month because you never know when that is going to save your life.

How are you preparing for the ride?

Since I’ve been slowed down from the chemo I haven’t been training as heavily as I was the last time I did the ride. I’ve just been trying to get on my bike as much as possible. Getting in some cardio at the gym whenever I can and mentally preparing for it. I’m not planning on breaking any time records this year but I’m a pretty avid cyclist so I’m confident I’ll be able to complete the ride. I’ve had quite a few people that have been incredibly generous when it came to donating to my ride. I’ll be doing it with my sister and the rest of the Steam Whistle team. We’ve had a number of fundraising events at the brewery and now I’m just focused on maximizing the amount of money we can fundraiser for Princess Margaret Hospital. Matt is Mr. May in our Men of Steam Whistle Calendar, available in our e-store. Of which 100% of proceeds are donated to the Ride to Conquer Cancer.

What words of advice would you give to people that are considering participating next year?

Just do it, it seems like a daunting commitment when you first look at it. There’s hundreds of kilometers to ride and thousands of dollars to raise but you only get to the end by taking it a dollar and a kilometer at a time. Join a team if you can and get involved in their fundraising initiatives and start some of your own. People are happy to help when it’s going to such a great cause. Once cancer has touched you and people know that they start opening up and sharing how it’s touched them.

You can help Matt reach his fundraising goal by donating to his Ride to Conquer Cancer page here.