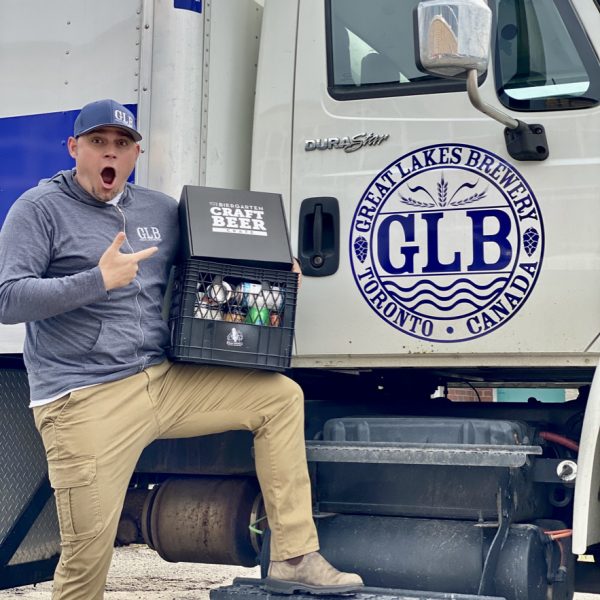 We spoke with Troy Burtch, Marketing & Communications Manager, at Great Lakes Brewery about the selection of beers he and his team chose to be included in the Steam Whistle Biergarten Craft Beer Crate Vol.5. Check it out!

Tell us a bit about Great Lakes Brewery!

Well, good beer folks, GLB has been around for 34 years, making us one of the oldest independent craft breweries in Canada. We’re located at 30 Queen Elizabeth Blvd. in the bustling borough of Etobicoke – you know, ‘craft brewed west of the Humber.” We have a number of year-round beers available across Ontario (Canuck Pale Ale, Octopus Wants to Fight IPA, HazeMama New England IPA, BURST! New England Pale Ale and Pompous Ass English Ale) and produce over 100 different ones through our Tank Ten and 7 Barrel series of beers. We are a fun bunch of beer-drinking humans who enjoy the company of others and creating memorable experiences with #FreshGLB. Oh, and it would be silly of us not to mention this little tidbit – we are opening a second location in the Fall of 2021 at 11 Lower Jarvis Street – The Great Lakes Brewpub.

What made you want to join Steam Whistle in the curation of the Craft Beer Crate?

So far, pretty easy questions (wipes brow). We have a great long-lasting relationship with Steam Whistle and have worked on many projects together over the years (Roundhouse Beer Festivals, South Etobicoke Brewers, collaborations, pub crawls, and more). When they brought up the idea, we jumped at it. Who wouldn’t want to painstakingly agonize over a list of beers from local breweries – adding and subtracting names/beers – wishing we could include more – but we thought it was a great idea and a great opportunity to show drinkers out there what kind of beers our staff are loving right now.

What inspiration did you have while curating the Craft Beer Crate?

Ok, let’s break this down into segments. Buckle up.

1. Great beers made by great people who do great things in their community. That was the first factor. All the breweries we’ve chosen for the crate do amazing work in their region, helping and uplifting people, ensuring vital organizations and associations succeed and thrive.

2. We also surveyed the GLB staff to see what breweries and what beers they’d like to see included. This allowed our entire staff to participate in putting together this crate. Teamwork makes the dream work. We are a tight-knit bunch at GLB so staff participation was key.

4. Styles – we wanted to showcase the types of beers that we love and the brands that we believe are killing it out there in the market. We looked at crisp lagers, juicy pale ales, and… and we believe this crate is a great representation of what a ‘craft summer’ would look like.

Would you recommend drinking the crate in a specific order?

Nah, be a rebel. Do your own thing! Want to crack open a Great Lakes Lager then get into a Voodoo Ranger IPA, or vice versa, go nuts. Do want feels right for you. Every beer – every style – has a time and a place, but you do you! However, we will recommend that you drink these beers fresh. We truly believe in fresh beer – it’s been something that we’ve focused on for so many years here at GLB (#FreshGLB®). Stick the cans in a fridge (or cool dark space) and drink as fresh as possible to experience all the amazing qualities that the brewers intended when producing them.

What do you consider when developing a mix pack?

Songs from the 80s, 90s… oops, mix pack, not “mixtape”. Our bad. Well, Steam Whistle, we kinda answered that already. But, it was a wordy answer so we’ll boil it down to this – friends, new breweries in other regions doing great beers, community-minded do-gooders and styles. We really wanted to showcase lagers, pale ales and IPAs.

Are there any other beers from other local breweries that you would have liked to include in the crate that just couldn’t fit?

Of course. So many. We pride ourselves at GLB on our relationships with other breweries, both locally and nationally, and it was very tough putting together this crate. That said, knowing that other breweries get to curate their own crates one day, including other breweries, that helped. Ontario is truly blessed with so many exceptional beers being brewed by some truly amazing individuals and organizations.

Some of these beers you chose are not available at the Beer Store or LCBO – making the purchase of this crate even more exciting for customers. What beers are only available for purchase at their breweries?

A lot. Almost all of them. Certain beers in the crate from Bellwoods, Blood Brothers, Tooth and Nail, Anderson, Sawdust, Matron, Dominion, Granite, Amsterdam, GLB, Godspeed… are only available via the brewery, so, as we mentioned, a lot.

What are your favourite beer snacks? What other snacks do you enjoy while sipping on some of these awesome Great Lakes beers?

You ever read our tasting notes? Cheez whiz, fruit loops, Pop! Rocks, skittles, cheese puffs… you get it. While all those are great, we like breads, cured meats and cheeses with our beer. A nice soft pretzel with Great Lakes Lager or some sharp cheddar with our Tango Tart Wheat Ale. We also have a soft spot for the snacks made at San Remo Bakery, our friends down the street here in Etobicoke.

Can you provide some food pairing recommendations for the Great Lakes beers in the crate?

We absolutely love coming up with pairings for our beer. Eating different foods and drinking different styles to see what works and what doesn’t – it’s the best part of drinking beer.

Great Lakes Lager – Things from some of Etobicoke’s finest establishments, like Dino’s Wood Burning Pizza or 850 Degrees, Tom’s Dairy Freeze Ice Cream, any pie from The Pie Commission, a colossal sandwich from San Remo Bakery… you get it.

The Biergärten Craft Crate Vol.5 will be available on June 8th at 12pm! Visit our Marketplace here to browse our artisanal Biergärten products.