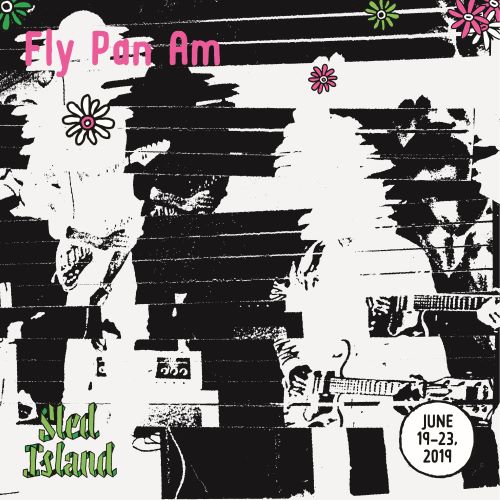 Our next Sled Island Spotlight focuses on the legendary group with the tongue-in-cheek name, Fly Pan Am. Learn more about this indie band from Montreal.

Our next Sled Island Spotlight focuses on the legendary group with the tongue-in-cheek name, Fly Pan Am. But before we get into extolling the many merits of this inspo band, let’s take a minute to bring you up to speed on Sled Island.

Sled Island is a yearly music and art festival designed to immerse you in a transformative experience with an impressive lineup of music shows, art, films, and comedy over the course of five unforgettable days. Over the next few weeks, our mission is to get you hyped up with regular features on lineup standouts, and this week is no exception.

Experimental rock veterans for over 20 years, Fly Pan Am is a Montreal-based Canadian band that only gets better with age. Recently back from a 14-year hiatus, Fly Pan Am is ready to rock and roll again and are gracing Sled Island with their badass presence. The band is made up of two guitarists, Jonathan Parant and Roger Tellier-Craig, the drummer, Felix Morel, and the bassist, Jean-Sebastien Truchy.

Fly Pan Am writes and plays in French with English interspersed, which gives the music a refreshing sound in the English-dominated Canadian music scene. Their specialty is avant-garde, alternative rock that pushes the boundaries of traditional rock sounds, making them a perfect fit with the Sled Island lineup and MO.

With a multitude of impressive collaborations and shows under their belt, Fly Pan Am is no rookie. In fact, their reputation precedes them. They bring a notable, weathered history with them to Sled Island, and combined with the fact that they’ve just recently played their first live show since regrouping after 14 years, there’s no shortage of excited fans eager to reunite with a longstanding Canadian rock icon. With the 20th anniversary of their debut album coming up, performing at Sled Island is no small thing for Fly Pan Am and their loyal following.

When it comes to their planned performance at Sled Island, there’s no sure-fire way to know what these rock rebels will do. Fans are hoping for a satisfying mix of old favourites and some new sounds too, but there’s no predicting what these legends will pull out of their hat. After all, they shocked the music scene with their recent regrouping, so we’ve learned to expect the unexpected. And hey, if that’s not what Sled Island is all about, then what is?

Make sure you get your passes for Sled Island Music & Art Festival early, because you won’t want to miss the biggest performance of Fly Pan Am we’ve seen in years.