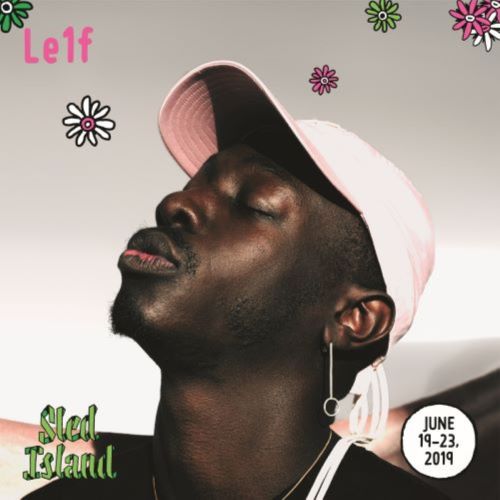 Get a behind the scenes look at Sled Island rapper/producer Le1f. Grab your sled island passes and make sure you attend this can’t miss festival.

As a proud Sled Island sponsor and presenter, Steam Whistle is obsessed with all things festival-related, not least of which are the incredibly talented performers. With artists to comedians, and a mishmash of more talent, Sled Island is making festivals great again. Combining edgy sounds with eclectic styles, Sled Island is the place to be this summer (we’re completely unbiased, of course). For five days in June, experience the magic that is the Sled Island Music & Art festival, but we’re helping you get even more excited with regular features on the lineup. This week, our spotlight is on Le1f, a hip hop slash electronic artist that’s making waves with his boundary-shattering music across North America. Intrigued? Keep reading.

Khalif Diouf goes by his stage name Le1f (pronounced like “leaf”). Le1f is actually the phonetic second half of his first name, which suddenly makes his stage name even more cooler. He’s an American rapper and producer, but an all-around badass person who also advocates for the LGBTQ community. After studying ballet and modern dance, he did a quick 180 and became a rapper in New York. Le1f first became known for his single “Wut”, which hit us right out of left field in its distinctive and strangely addictive sound. It propelled Le1f into the spotlight by competing for song of the summer in 2012, and ever since he’s been making his way slow and steady through the rap scene with an alternative but completely memorable rap sound. With a David Letterman appearance, multiple collaborations with other performance pioneers, and an eclectic mix of EPs, mixtapes, and a full studio album, Le1f is absolutely one to watch.

Among an incredible lineup of artists for Sled Island, Le1f stands out. He breaks down boundaries, pushes the limits, and displays a mastery of rapping and producing. He can fluidly move through different sounds, emotions, and styles within one song, which captivates his fans and keeps them wanting more. Le1f is the epitome of what Sled Island represents, as an experimental, independent artist that’s never satisfied with the status quo—and definitely isn’t chasing the top forty fan base with his subversive bangers.

Le1f will be at Sled Island this year and is one of many talented artists that are rounding out what’s sure to be an incredible festival. With so many unique styles and a variety of genres, there’s something for absolutely anyone—unless music, comedy and art aren’t your thing, in which case there’s no hope for you. This June, experience Sled Island festival in its entirety for a long weekend that will open your eyes to new favourites, new sounds, and maybe even a new perspective. After all, it hasn’t been touted as a “festival of discovery” for no reason.

Get your passes to Sled Island 2019 here; we can’t wait to see you there!