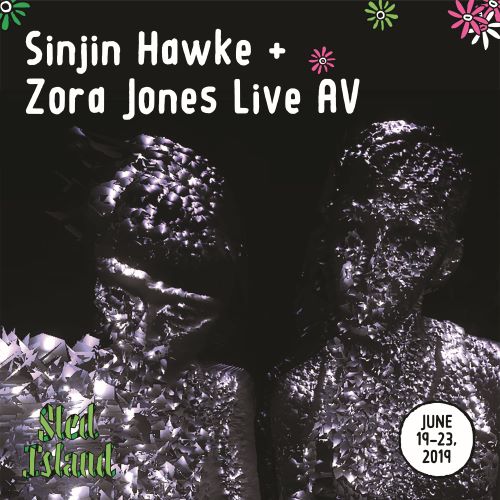 Bringing entrancing electronic together with some sic inspired hip-hop beats, Sinjin Hawke and Zora Jones are a modern music phenomena — and we’re stoked to be able to see them at this year’s Sled Island Music Fest.

Bringing entrancing electronic together with some sic inspired hip-hop beats, Sinjin Hawke and Zora Jones are a modern music phenomena — and we’re stoked to be able to see them at this year’s Sled Island Music Fest.

Born Alan Brinsmed, Sinjin’s mesmerizing approach to trippy and soul-expanding music production was in large part influenced by his father — a French Horn Performance graduate from the University of Toronto turned graphic designer. It was his father’s musical influence and audio-visual work that is credited with having a profound impact on Sinjin, who  began foray into music with classical, then, around the age of 11, turned his attention to hip-hop and R&B.

At this time, he lived in Montreal, having moved there from New Jersey where he was born. He would eventually go on to study Music Technology at McGill University. His biggest and earliest influencers were legendary music producers like DJ Premier and Just Blaze: artists with elaborate orchestral style, which you can hear in Sinjin’s own music today.

Since then, he’s gone on to work with many of today’s top talents, include Kayne West and even his idol, Just Blaze. The results have been amazing, earning him global acclaim.

Austrian born and now Barcelona-based Zora Jones studied fashion designed before turning her highly-tuned creative focus to the world of music production. Her work is elated and whimsical but it also carries intense emotional poignancy. One of her favourite instruments is the human voice, which she resamples, stacks in mind-boggling fifths and showcases in silvery pitches.

It’s no surprise that Sinjin and Zora work so brilliantly together, combining sight and sound to create immersive, unforgettable experiences via Fractal Fantasy, a platform that’s home to their artistic collaboration.

Get your passes for the whole festival here and tickets to specific events here.