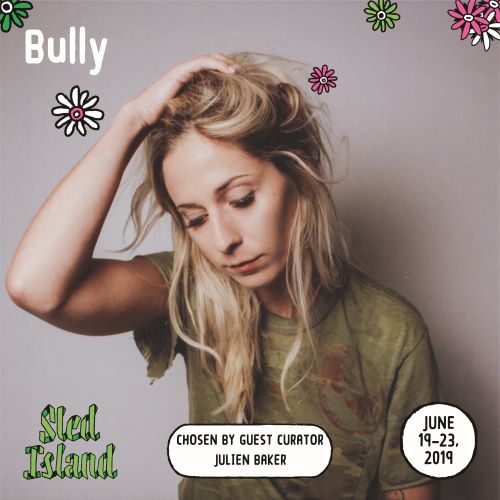 In this Sled Island Spotlight we take a look at Nashville based roack band, Bully. With an alternative, punk and grunge blend sound you are sure to enjoy.

Bully, a  Nashville-based rock band combines elements of alternative, punk, and grunge to create a unique sound that leaves fans craving more. 90’s alternative rock lovers will be drawn to their nonchalant attitude and angsty lyrics.

Lead vocalist and founder of the group, Alicia Bognanno worked as an audio engineering intern in Chicago at Steve Albani’s iconic studio: Electrical Engineering. Alicia was able to combine her technical skills as an audio engineer with her musical aptitude for songwriting when she created “Bully” in 2013 with guitarist Clayton Parker, drummer Steward Copeland, and bassist Reece Lazarus. Two years later, the band signed with Columbia Records label, Startime International, where they released their debut album entitled: Feels Like (2015). Since then, they have released a second album which has a slightly softer sound than their first: Losing (2017).

Arguably, Alicia’s vocal talent is the most magnetic attribute of the band. Exclaim describes her voice as, “constantly fluctuating between a sweetly polished coo and a throaty scream.” Her vocal range and strained chords are reminiscent of Kurt Cobain, yet with a new sound. She is accompanied by a talented band that executes the chaotic sound of the alternative rock genre, while maintaining an organized musicality.

On Spotify alone, they have tens of thousands of dedicated listeners. Songs like Trying and I Remember have millions of streams. While their success on streaming services is notable, their real claim to fame are their impressive live shows.

The band is known for their captivating performances that absolutely thrill their audience. The band pours their entire heart and soul out on stage, never failing to leave behind a roaring crowd. Their shows are packed with music, and there is often little to no grand theatrics. This style of show allows their raw talent to shine through. Chicago Tribune writes that Alicia, “tore her throat to shreds,” on stage, adding that “you don’t need any frills when you can do that.”

Bully creates more than just great music. They create a feeling. One that’s difficult to put into words, yet when their music is played, it’s understood perfectly.

Bully is just one of the bands in a face-melting, soul-edifying line-up of performers at this year’s Sled Island Festival.