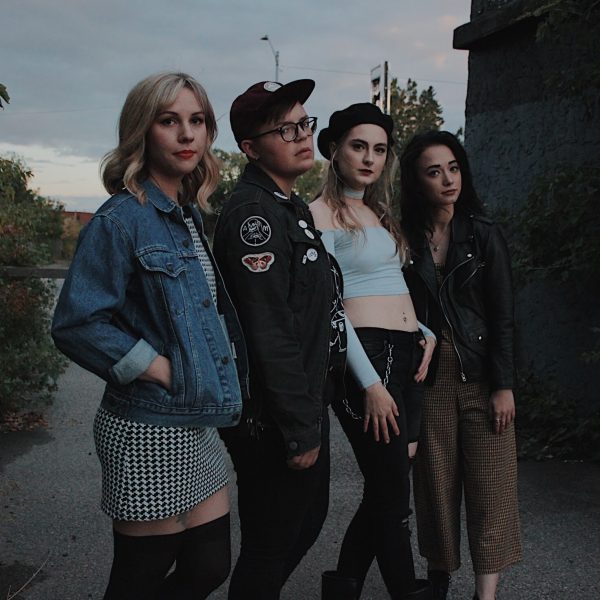 Lashes is front and center in this Sled Island Spotlight. This youthful and energetic brand brings their own style to the dream rock genre.

Energetic, youthful, and angsty. Those are just a few words to describe the band Lashes’. Their energy derives from peppy riffs and relentless vocals. Their youthfulness comes from not only their age, but also the new sound they bring to the dream-rock genre. Their angst comes from lyrics that demonstrate a righteous refusal to conform to traditional female gender roles. Each of these attributes play a key role in creating Lashes’ distinctive sound.

To get a sound that stands out, a band needs gifted members that stand out too. Each member of Lashes is both a vocalist and an instrumentalist. Blake McCleod plays the guitar, Kylah Floen the bass, Katie Hillson the keyboard, and Honor Charlton the drums. In addition to them each being a talented vocalist and instrumentalist, they are all songwriters. Each of the four members has deep musical knowledge and ability that contributes to their collective talent as a band.

Another important attribute of Lashes is their feminist message. Through their track entitled Don’t Lady Me the band communicated to their audience that they will not let themselves be belittled for being women, and neither should anyone else. The fact that each member is a musician and songwriter, means that no one can diminish their capabilities as artists. Because of their individual strength, and the strength of their band’s communal message, no one can say that Lashes is “just a girl band” because they are so much more.

Lashes released an EP in 2018 with four tracks on it, all of them having a lively twist on the alternative rock genre. Their success has been met with opportunities to play at various venues in and around their hometown of Calgary, Alberta. They’ve played shows at McHugh House, Without Paper’s Pizza, and Broken City. And of course, they will be playing the 12th annual Sled Island Music and Arts Festival, also in Calgary. The renowned music festival attracts hundreds of talented artists and thousands of eager fans to the Canadian city for an epic five day experience packed with flair and discovery. We’re thrilled to be there, and proud to be the featured sponsor.

Get your passes here!