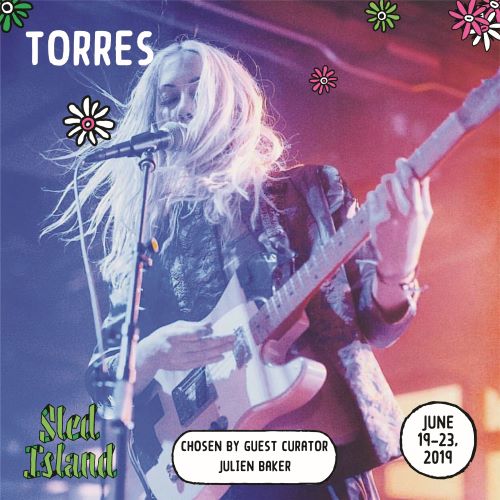 Georgian rock singer Torres is the focus of this Sled Island Spotlight. Her hauntingly beautiful voice will be on display at the 12th annual Sled Island.

Few sounds are as hauntingly beautiful as TORRES’ singing voice. The Georgia-native singer-songwriter has a voice that is capable of effortlessly fluctuating between deep bass notes and soft high notes to create an enchanting sound unlike any other rock musician. Paired with either some simple guitar chords, or an intense drum-electric guitar combo, TORRES voice fascinates her audience in new ways with each and every song.

Available on Spotify and Apple Music, TORRES’s hit singles like The Exchange and Sprinter attract millions of listeners. She also has three, critically acclaimed albums under her belt: TORRES (2013), Sprinter (2015), and Three Futures (2017). The success of her music gave her the opportunity to open for Brandi Carlile, who is one of her biggest musical inspirations. Her work has received outstanding reviews all around with her debut single Honey being named “best new track” by Pitchfork Media, and her second album receiving an A- on Metacritic. The AV Club wrote that her third album promoted “truly immersive listening.” This type of listening is best experienced during her live shows.

TORRES’ live performances are famously theatrical and enchanting. She is able to achieve this style of concert thanks to her background in musical theatre. Her taste for the dramatics was developed from a young age alongside the development of her musical talents. Her acting abilities shine brightest when she completely loses herself in her performance in order to tell a story through her music. Through unbroken facial expressions and acts like burning sage, TORRES totally encapsulates her audience. COS writes of one of her shows, “As her low bellows turned to vicious howls, her sage-burning raised the question: Is she trying to protect herself or protect everyone else from her?”

Put simply, TORRES puts on a show that you do not want to miss.

You can see her at the 13th annual Sled Island Music and Arts Festival in Calgary, Alberta. This five-day festival hosts hundreds of gifted artists, musicians, comedians, and film-makers. All of which, but especially TORRES, are worth checking out.