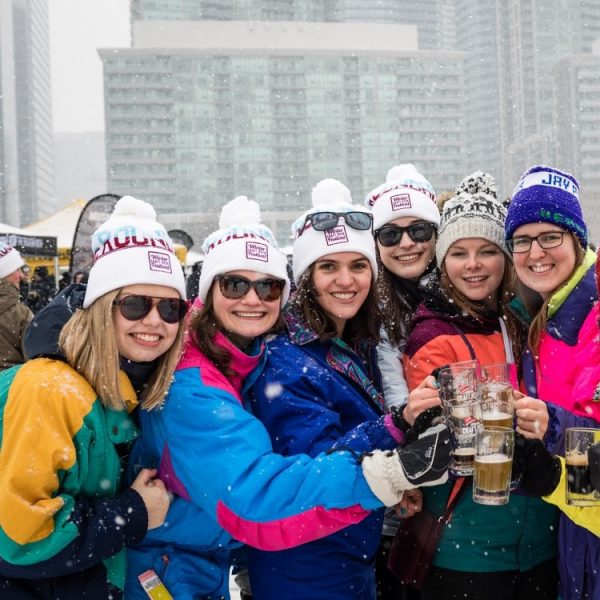 What to Expect at the 2020 Winter Craft Beer Festival

The Winter Craft Beer Festival is one of our most anticipated events of the year. This blog will let you know everything to expect at our winter wonderland.

Craft beer lovers from all over the world flock to The Six for our annual Winter Craft Beer Festival. Froth, food, fun, friendship and, of course, some frosty weather abound at this delicious and auspicious Toronto event.

We’re chuffed to be hosting the event again this year on Saturday, February 1st at our home, Roundhouse Park. Call your pals, bust out your retro snow gear, and get ready for a truly incredible, truly Canadian craft beer experience.

When we began the Winter Craft Beer Festival, it was one of the only craft beer fests in the country. Now, you can’t flick a beer cap without hitting another craft beer festival.

And this is a good thing! We commend our fellow craft brewers and craft beer enthusiasts for spreading the love about the beauty of the microbrew.

The thing is, most of us can’t make it to every craft beer fest. We’re spoiled by choice and our quest for new, truly exceptional craft beer can suffer. That’s why the Winter Craft Beer Fest brings together the best of the best craft beers and a hella hospitable, campfire toasty winter celebration, all in one spot.

From old favourites to cool new brews, we spend the whole year curating our list of craft beer vendors. Here are a few of the over 40 breweries you can expect at the 2020 Winter Craft Beer Festival:

Made with the same strict Bavarian standards as yours truly, you can enjoy knowing on the best, purest ingredients have gone into making your beer.

Fat Tire Amber Ale: Amber ale doesn’t get much better than Fat Tire.  Smooth, brilliant and well-balanced, an afternoon at the Toronto Craft Beer Fest with a pint of Fat Tire is like the best first date you never had.

Steam Whistle: The Roundhouse Craft Beer Festival wouldn’t be complete without Steam Whistle. Celebrated as Canada’s premium pilsner, the crisp, clean and dry in flavour, Steam Whistle is the golden child of craft beers. Of course, like any doting parent, we’re partial–but honestly, completely justified, too.

Wellington Brewery: You bet your beer foam that the oldest microbrewery in Canada would be in attendance at the Winter Craft Beer Festival!

Wellington has been independently owned and operated since 1985 and from the beginning, has created exceptional beer. As one of the first breweries in North America to revive the ancient cask-condition cask ale technique, Wellington has a place in our hearts for their commitment to time-honored, time-tested practices.

This Toronto craft beer festival also includes grub by some of the most mouth-watering food trucks in the city (and beyond) as well as DJ and dance party, crazy-carpeting, campfires and marshmallow roasting, a photo station to capture the good vibes for posterity as well as the old school games we all love, like bean bag toss, giant Jenga, Connect 4 and giant beer pong.

Tickets for the Winter Craft Beer Festival are $35 in advance or $40 at the gate. Tokens for your craft beers are a mere $1.

The first 500 people through the gates at the Roundhouse will score a FREE limited-edition Round House Craft Beer Fest toque, so try to get there when the fun begins at 11 am.

Get ready for the ultimate Toronto craft beer festival– we’ll see you there!

Get your tickets here.