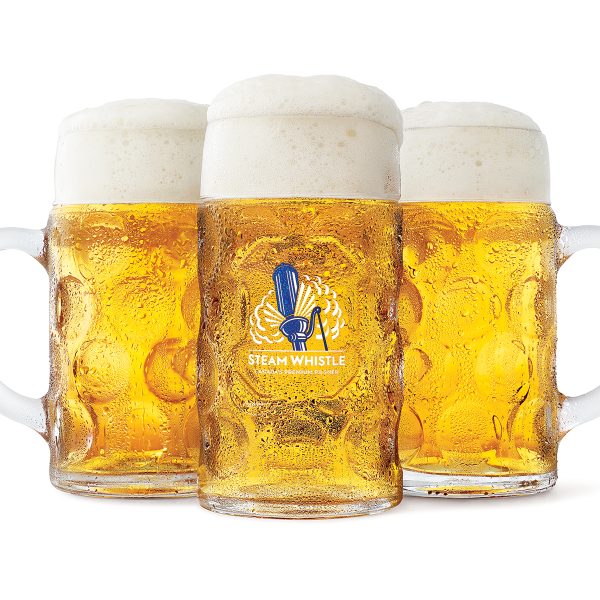 Where to Party in Toronto for Oktoberfest 2018

Throw on your lederhosen, these are the best places to party in Toronto for Oktoberfest 2018. Including our very own bash held by Steam Whistle Brewing.

Crack open a beer, friends, ’cause around Toronto, it’s stein time! That’s right: Oktoberfest Toronto is back for yet another year of lederhosen-clad revelry — and given our Bavarian roots, you can bet your grandma’s strudel we’re pretty stoked to be a part of it. Whether it’s your first year adding some oom pah to your October or you’re a veteran at the bierhaus, this year promises a smorgasbord of tasty eats, beatific brews and exciting events.

But before we get in to where to go this year, let’s talk a little about why we celebrate this auspicious event.

Ah, love. It’s inspired songs, poems, truces and wars. It’s also behind the origins of Oktoberfest, which was first held on October 12, 1810 — the day Bavaria’s Crown Prince Ludwig married the Princess Therese of Saxony-Hildburghausen. Throwing caution to the wind (and in the face of tradition) the soon-to-be newlyweds decided to invite the common folk to their festivities. Forty thousand people RVSP’d with a resounding hell yas!. And the party? It lasted five days. The following year, the royal couple decided to bring their party to the people yet again and just like that, a tradition was born. The traditional dirndl (female) and Lederhosen (male), in all its splendor!

While guys don’t need to slip into lederhosen and gals don’t need to don dirndl to celebrate Oktoberfest, it certainly makes the experience more fun when you have a Bavarian inspired outfit. Both of these habiliments are trademark German clothing that actually began as peasant garb. Around the 18th century, they were adopted by the upper classes.

Today, both lederhosen and dirndl are worn proudly, if also a little awkwardly, at Oktoberfest events in Toronto and around the world.

Where to Go This Year

Unless you’re planning to jet back to Munich, Toronto is the place to go. There are many vunderbar events to enjoy, but these are the must-attend. Check it out and then get your Oktoberfest tickets, jetzt!

Obviously you’ve gotta come by our party! We’re not biased: this IS the best Oktoberfest event in Toronto, and we come by our claim honestly. Steam Whistle is one of the only breweries in the world to honour the Bavarian Purity Act of 1516, which states only four ingredients can be used to brew the finest beer: hops, yeast, water and malted barley. No exceptions!

So, it’s no surprise we take our Oktoberfest seriously. And by seriously, we mean tons of fun and frivolity! We’ve got beer. We’ve got pretzels. We’ve got currywurst and schnitzel. We’ve got a Stein Holding competition and more beer than you can shake a strudel at. And we’ve got it all for you! Tickets are only $15 and you snag a free stein with your entry!

Where: Ripley’s Aquarium of Canada

Who doesn’t love a good play on words? Combine this punny name with some fishy company and solid brews from ten local breweries, and you’ve got a night almost guaranteed to go just swimmingly.

This beer and fun fest is a highly anticipated annual event that now opens a day earlier — on the Thursday night! With events for adults as well as for whole family, anyone of any age can get ready to polka, grab some schnitzel, slam back a stein and have the best time this side of Munich!

The Blue Danube is a Toronto institution, so if you’re looking to soak up some genuine TO culture and take a dip in a German tradition, then swing on by! This club is dishing out German food, drink and dance for an all-out, one night only, Bavarian brew-haha.

You’d expect the good ol’ BierMarkt (on The Esplanade) to serve up some brewskies for Oktoberfest — and they deliver! This festival of foam runs for two weeks, and features parties, live music, tons of Bavarian eats and many a-stein on tap and ready to enjoy.

See what the smaller breweries have in store for Oktoberfest by hopping into your ‘hosen and popping on over to Toronto’s Craft Beer Market. No tickets necessary to enter — just come on by and sample the brews and schnitzel, ol’ school!