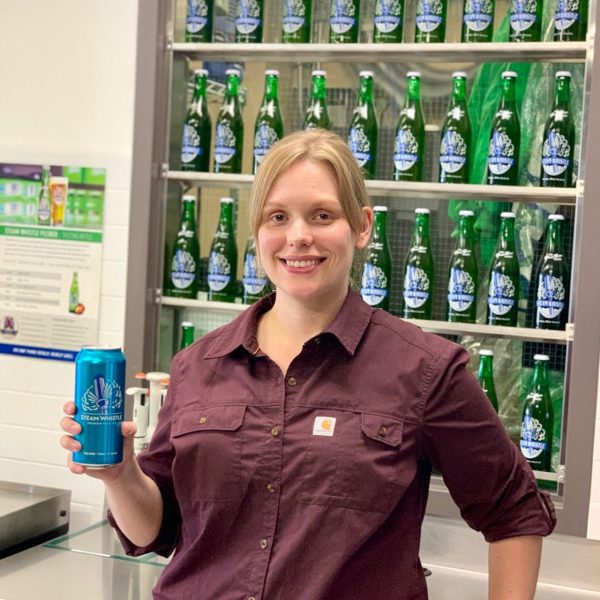 We spoke with Head Brewer at Steam Whistle, Erica McOustra. Erica and her team of brewers are the brains behind the new Pale Ale, so we decided to grab some time with Erica to learn more about her and what people can expect from the new Steam Whistle Pale Ale.

How long have you been a part of the Steam Whistle/GBF family?

What is your position at Steam Whistle?

Can you describe your role?

I have a great team of brewers who work very hard with me, but my day-to-day tasks include managing the raw materials in the brewhouse and planning for our two locations (The Roundhouse and Evans Avenue). I also work with Quality Assurance and other Operations departments to ensure we brew great beer for our customers.

What’s your favourite part about being the Head Brewer here at the brewery?

Being able to make small incremental changes that improve our beer.

What are you most excited about with the Pale Ale?

Working to achieve hop flavour and aroma, as well as expanding stability in our shelf-life.

What can consumers expect from the Pale Ale?

The Pale Ale is hop forward but still balanced. It’s crisp and highly drinkable. There may be confusion about what type of Pale Ale it is, but it’s a Canadian Pale Ale. It does not fit the British or American Pale Ale substyles, but takes inspiration from each.

If you had to choose, what would be your favourite aspect of working at Steam Whistle?

Learning more about our equipment and our beer through problem-solving with a great team.

What makes Steam Whistle stand out as a brand?

No surprises, just good beer. Good branding, and if you come down to the brewery to drink it at the source the Good Beer Folks, we’ll show you a great drinking experience.

What is a Steam Whistle initiative that means a lot to you?

Water reduction. Water is an important resource for brewing that is becoming more scarce and we can’t take it for granted.

Where is your favourite place to enjoy a Steam Whistle?

In my backyard watching my hops grow.

What is one word you would use to describe your work experience with Steam Whistle?