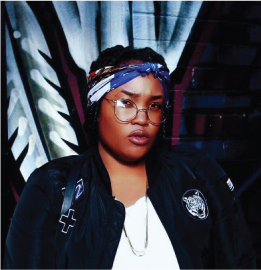 This Sled Island Spotlight focuses on hip-hop/R&B musician, Sinzere. She brings her unique genre bending style to our show alongside numerous other acts.

From her humble beginnings growing up on the streets of Calgary, Alberta, renowned artist Sinzere has come a long way. The struggles she faced in her youth fashioned her into the strong, artistically gifted woman she is today. Using the obstacles she faced to her advantage — but not allowing them to hold her back from following her dreams — she’s used her experiences to shape her singular sound. She’s channeled all of her experiences, all of her pain, all of her passion, and all of herself, into her music.

Drawing inspiration from various artists in various genres like rapper Biggie, R&B singer-songwriter Toni Braxton, and soul musician Lauryn Hill, Sinzere creates music in a genre all of its own. She mixes the best elements of hip-hop, R&B, rap, and electronic into one distinctive blend. Sinzere is able to skillfully maneuver between beats and flows accompanied by sometimes powerful, sometimes political, and always poetic lyrics. Evidenced by her unique musical style, Sinzere is a true bohemian. The bohemian image is one that Sinzere highlights in her music, through her music’s refusal to adhere to conventional rules and through mixing in lines from Queen’s inspirational single: Bohemian Rhapsody.

With one album, two singles, six music videos, and thirteen years of performing under her belt, Sinzere has made a name for herself as an artist that surpasses boundaries and expectations. She has accumulated thousands of listeners on Spotify alone, and her music is also available on Apple Music and other streaming platforms. Her talent has been recognized through nominations for awards like the Alberta Media Production Industry Award. In the words of Sinzere herself, she’s “came a long way from recording in that bathroom shower.”

Check out Sinzere’s website to hear her music for yourself.

Better yet, attend this year’s Sled Island Music and Arts Festival in Calgary Alberta to see Sinzere and the rest of a stellar lineup of phenomenal fringe performers. The festival runs from June 19th until 23rd and is known as Canadian festival to attend to discover sensational, raw talent.

As the festival’s featured sponsor, we’re counting down the days ‘til the first performance. Hope to see you there!