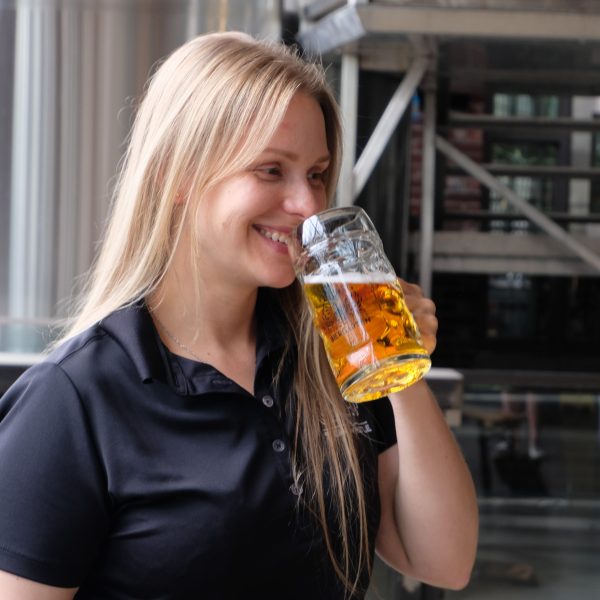 Who is the Brewmaster behind Steam Whistle’s Award-Winning Beers?

Erica McOustra was promoted to Brewmaster in June of 2020, earning this honour after a decade at Steam Whistle – most recently as Head Brewer – working alongside our two previous Czech Brewmasters. A credentialed Brewmaster, Erica received her education at the Versuchs- und Lehranstalt für Brauerei (VLB) Beer Institute in Berlin, Germany. This renowned technical research institute offers full degree and post-graduate certificates in brewing to domestic and international students. The quality-focused curriculum is steeped in German brewing traditions, including rigour and discipline with a strong orientation to Lager brewing. The institute is also at the forefront of technology, utilized to elevate quality and gain process efficiencies. Erica brings this training and experience to her leadership in crafting Canada’s Premium Beer.

How would you describe your philosophy of brewing, applied in leading the team at Steam Whistle?

My brewing philosophy includes an appreciation for brewing traditions while adopting a continuous improvement mindset – always driving quality forward.  By understanding and utilizing all the tools at hand – ingredients, laboratory testing, the diversity of the brewing team, and equipment – we make small tweaks to the process to have pronounced impacts on the final aroma and flavour of the beer.  The thoughtful combination of all these factors will showcase the best of each ingredient in our beers.

Who makes up the brewing team at Steam Whistle, and what are their roles?

I am truly fortunate to have a stellar group of colleagues working with me. Each brings unique training, experience and focus to our diverse group.

Evgeny Matyukhin is our Brewing Manager. Like me, he attended VLB in Berlin and earned his Master Brewer education. Despite being there concurrently, we never met as he was in Russian-language classes while I was in the English stream. But we share a similar outlook. He previously completed his Food Science degree at Voronezh State Technological Academy, specializing in Fermentation, Production and (Winemaking) Technology. Evgeny worked for larger breweries in Russia and then at Molson Canada before transitioning to the craft industry, first at Brunswick Bierworks and then at Steam Whistle.  As the Brewing Manager, he oversees the brewing process from raw ingredients, to the brewhouse, during fermentation and conditioning, through Filtration. The nuances of flavour, carbonation, and the beer’s stability develop in the ageing process, making it a critical phase to control.

Joyce Lau is our Brewing Team Lead, joining Steam Whistle after heading up brewing and R&D at Kombucha Brewery. She had previously assisted in brewing at Bellwoods, led tastings and events at Collective Arts Brewing, was a Draught Quality Auditor and a Beer Consultant to the hospitality industry. Joyce received her Craft Beer Brewing Certificate from the London, UK-based Institute of Brewing and Distilling, earned a certificate in Quality Assurance & Microbiology for the Brewer from Oregon State University, and is a Prud’homme Certified Beer Sommelier. Joyce provides oversight in brewing/filtration planning, data collection and analysis, and brews Steam Whistle’s portfolio of beers. Currently on leave, we’re looking forward to Joyce’s return to the team in 2022.

Josh Kirke is a our Brewing Team Lead. Josh completed a Bachelor of Science (Biology and Chemistry) from Wilfred Laurier University and brings years of brewing experience from several Ontario and Alberta craft breweries to his role. Josh attended professional development courses in malting and hop science where he learned to appreciate that quality brews come from quality ingredients. Josh provides leadership and direction to the brewing team, keeping our processes on track and working to uphold and improve our quality standards.

Ian Fraser is a Brewing Specialist, joining our team after working at Outlaw Brew Co. Ian first graduated with his BSc focusing on microbiology and molecular biology; he followed up with a post-grad certificate in Brewmaster and Brewery Operations Management, from Niagara College where he graduated top of his class. As a Brewing Specialist on our team, he is taking a focus on quality and training, helping our team with professional development and continuous improvement.

Brewer, Dan Tackaberry gained experience in the Steam Whistle packaging department before joining the Brewing team. Eric and Dan’s operational experience was an asset during the relocation and commissioning of brewing equipment from the Roundhouse to the Squarehouse in 2018. Alan Trimble, Brewer, also came to the Brewing team from Steam Whistle’s packaging department after showing keen interest and passion for the craft.

New to the team is Brewer, Spencer Campbell. Spencer joins Steam Whistle having begun his brewing craft at Brunswick Bierworks working alongside a few former Good Beer Folks. Spencer is no stranger to fast-paced dynamic environments like our Production at Evans, having spent many years in the hospitality industry making sure his customers were happy drinking beers, before learning how to make them.

Another new hire is Brewer, Veronica (Ronnie) Clarke. Ronnie is passionate about all kinds of beer and never passes up the chance to try something new! She has previously worked at High Park Brewery and in other brewing and winemaking positions. When she’s not homebrewing, you can find her working on new media art projects around Toronto.

We’re thrilled to have new brewers with diverse experience and talents join the Brewing Team.

What are some of your recent initiatives at the brewery?

I have been taking a more quality-focused approach to ingredient selection. In developing the recipe for our Pale Ale, I travelled to Washington State to personally select the hops for that brew.  We will typically buy forward contracts on hops from single purveyors to secure a consistent, high-quality supply for established brands. But for new products, we have been using our pilot brewhouse to trial new ingredients and recipes.  It has been fascinating to detect each unique hop or barley varietal’s slight differences and then curate a desired finished product from select ingredients.

I am also emphasizing our team’s future by building a focus on training and development. We work cooperatively, seeking each team member’s input on new product recipes, or providing cross-training opportunities in each other’s area within the brewery.  We are a strong team, made stronger through collaboration.

I promise to introduce more product innovation in 2021, in the form of unique beers made locally for the Biergarten onsite at the Roundhouse.  We also have new, seasonal brews planned to be packaged for distribution across Canada.